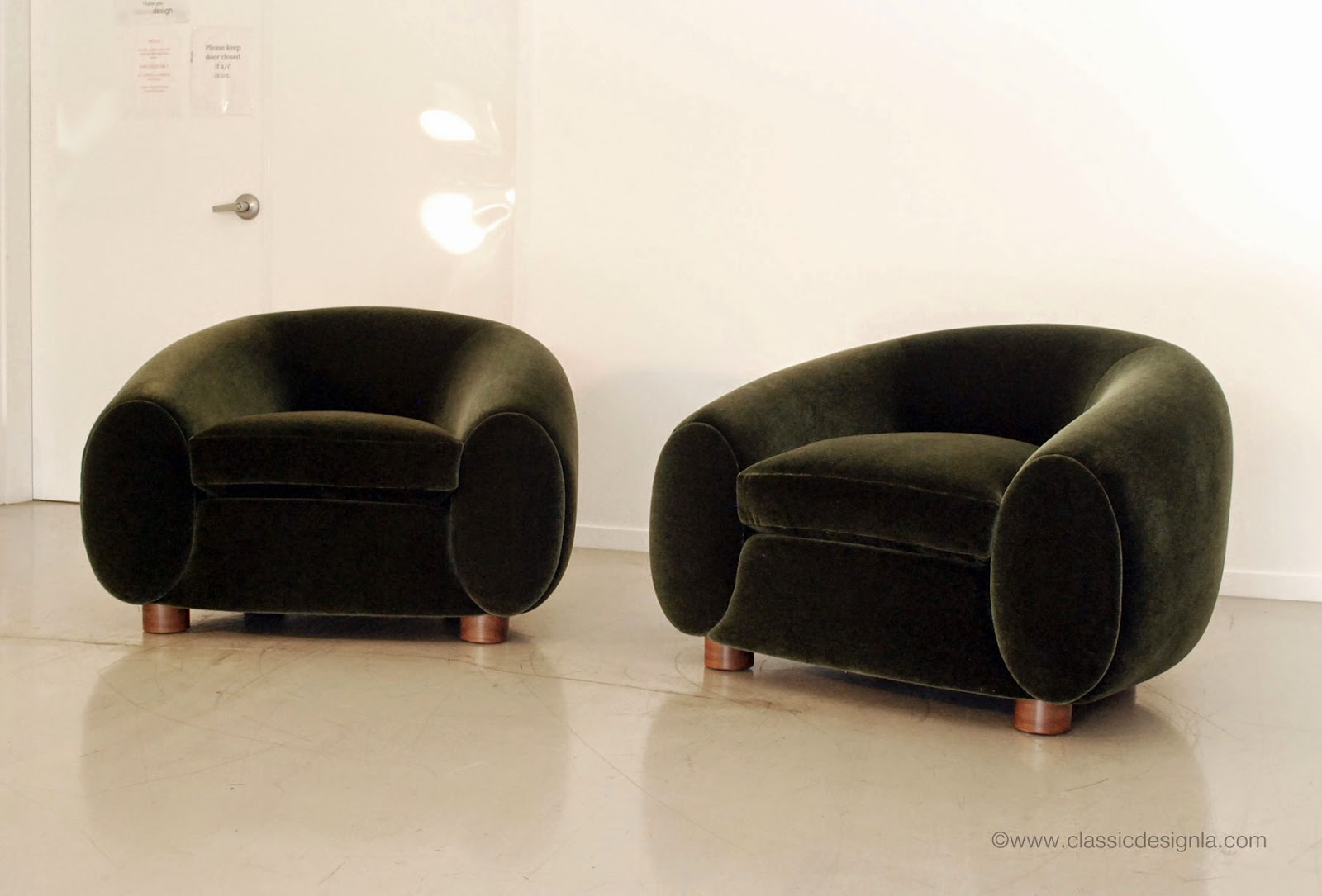 We just finished these two armchairs, based on a design by Jean Royere called the Polar Bear chair. His furniture and lighting pieces were designed and made in the 1940's & 1950's, and it is quite hard to find original pieces. When you do, they are priced very high, as you can imagine.

Jean Royere lived from 1902 - 1981, and coming from a distinguished French family, went into banking after studying in Cambridge. At age 29, in 1931, he quit banking and became an interior designer. Royere was influenced by Le Corbusier and Charlotte Perriand, but found his own way somewhere between modernism and a little traditionalism. 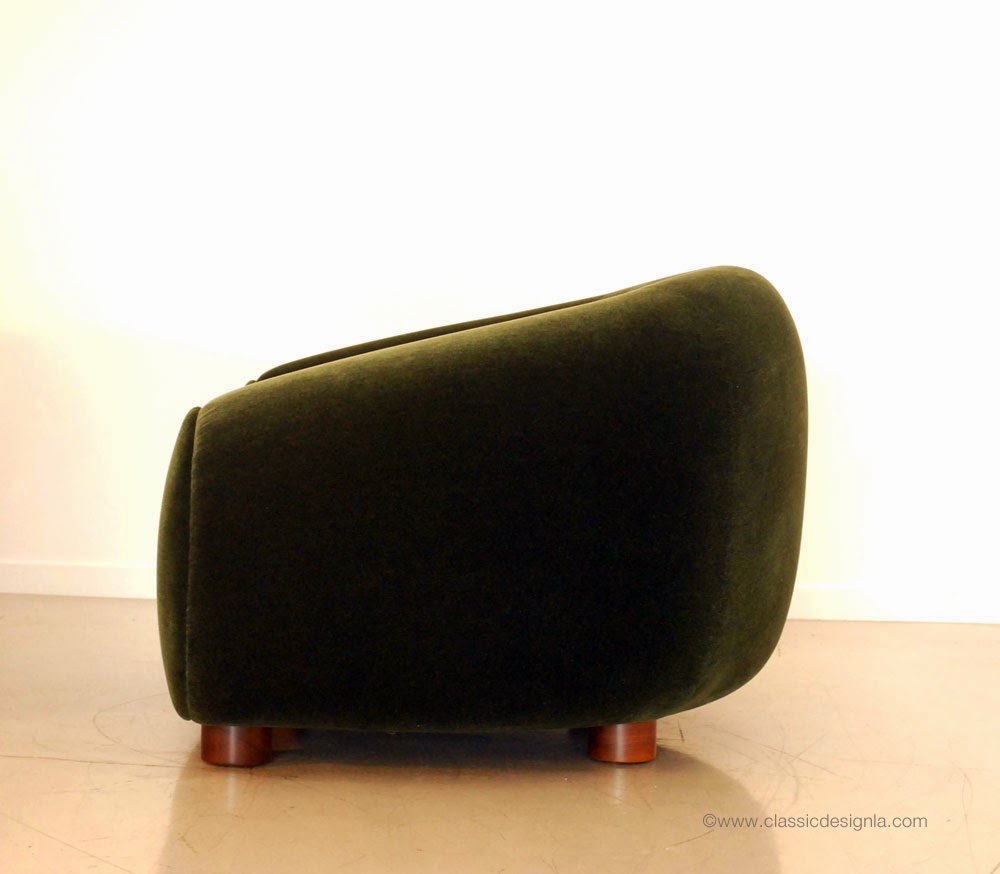 The Polar Bear chair is generously proportioned, with a rounded silhouette and low back. The legs are rounded as well, and fabricated in natural walnut. The forest velvet, chosen by our client, is perfect. 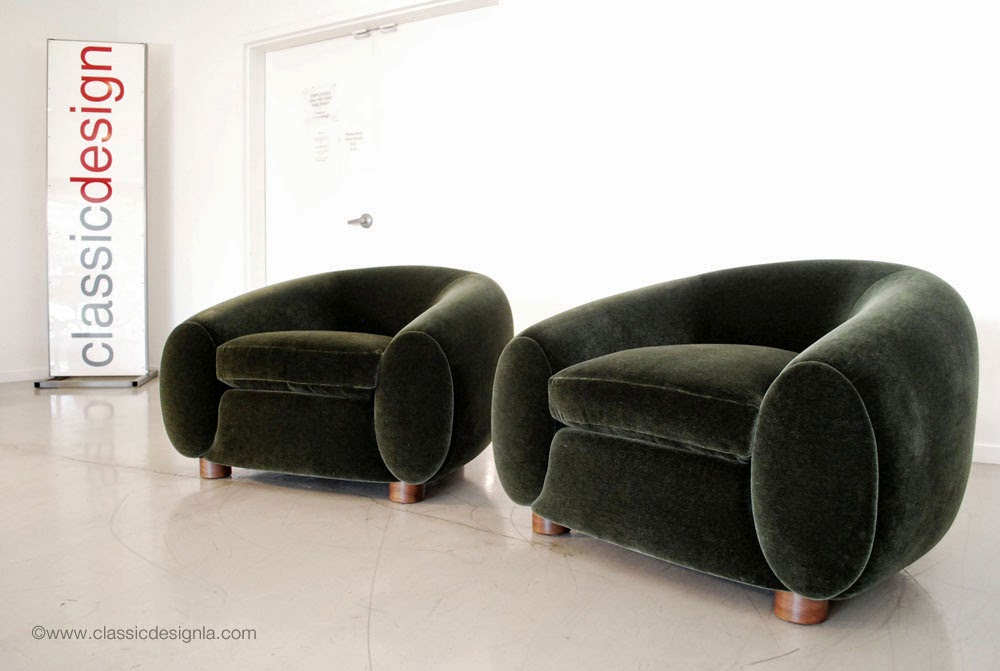 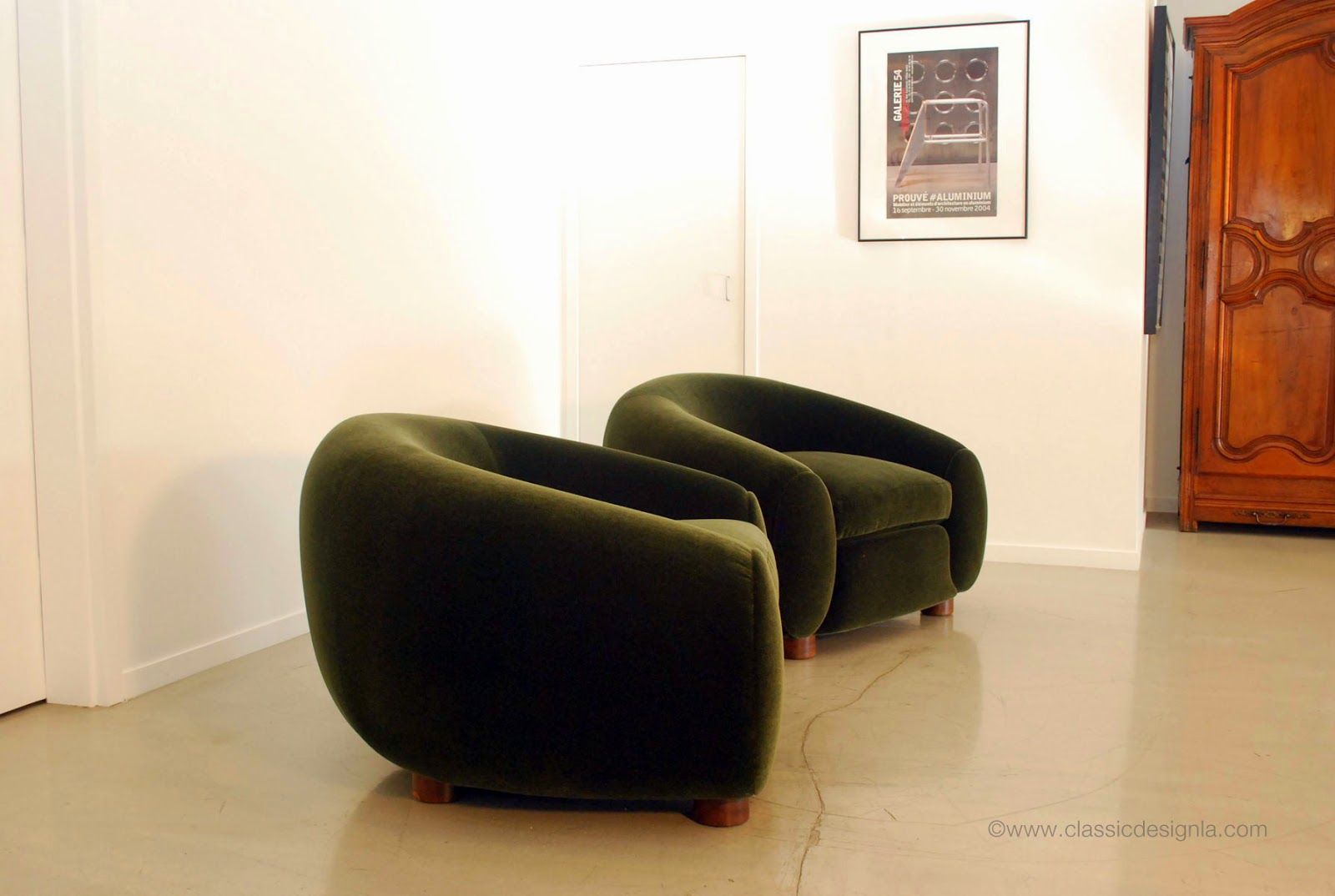 If you are interested in more of Jean Royere's work, this book is amazing. It's in French, but it is filled with photos and illustrations of his work. 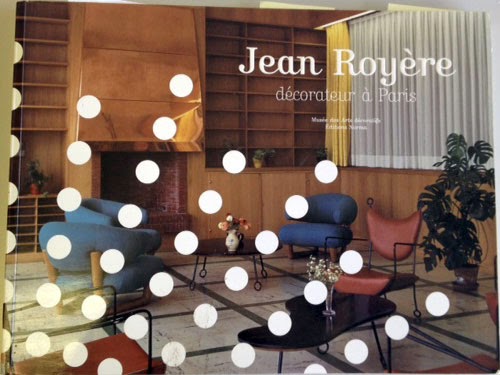 Posted by Classic Design at 11:56 AM No comments: 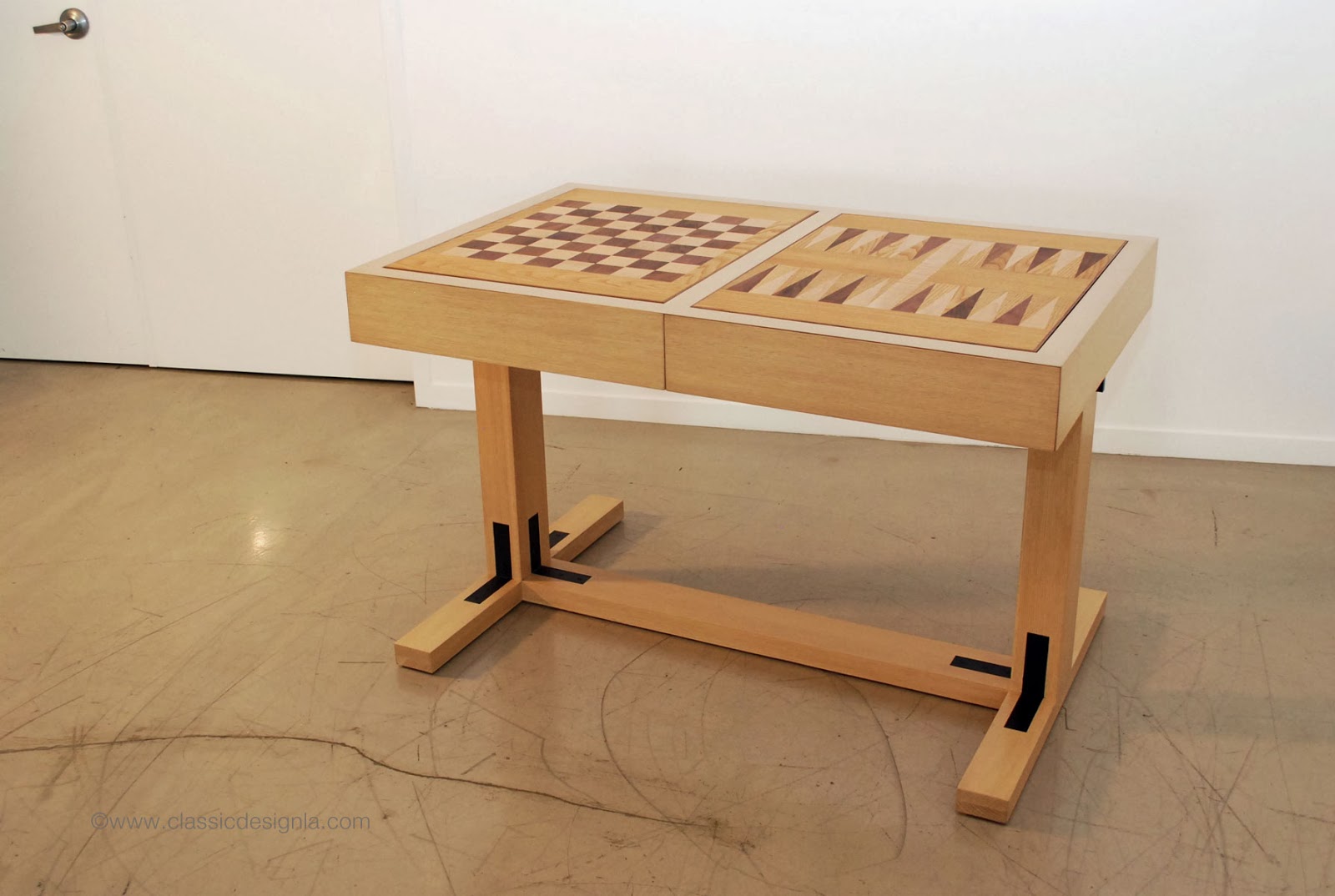 Excuse the exclamation point! This game table shipped out last week and we were thrilled with the way it turned out. The drawer case & lower frame are fabricated in white oak, with black metal hardware on the base. The drawers are mitered for a very clean, uniform look. 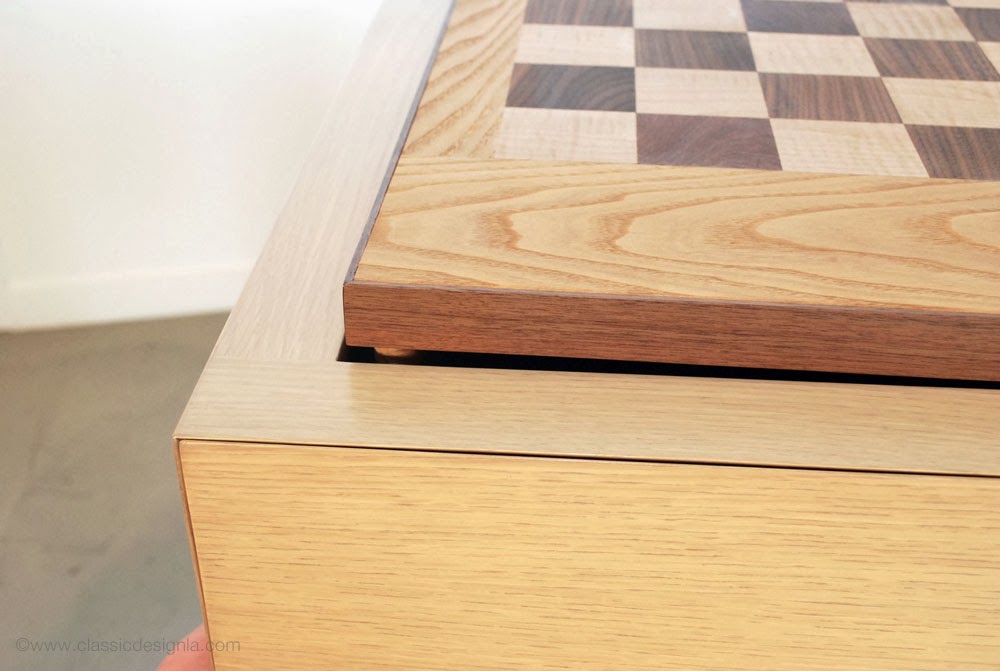 A little push mechanism under the drawer pushes the game board up so it can be flipped over... 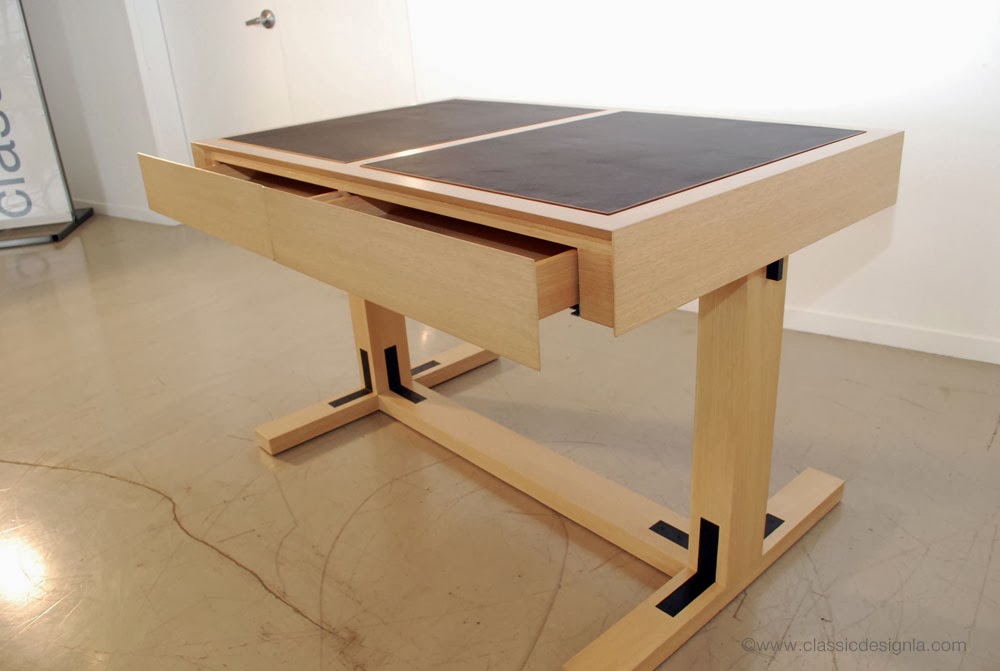 ...to expose a leather covered surface that can be used as a writing surface. 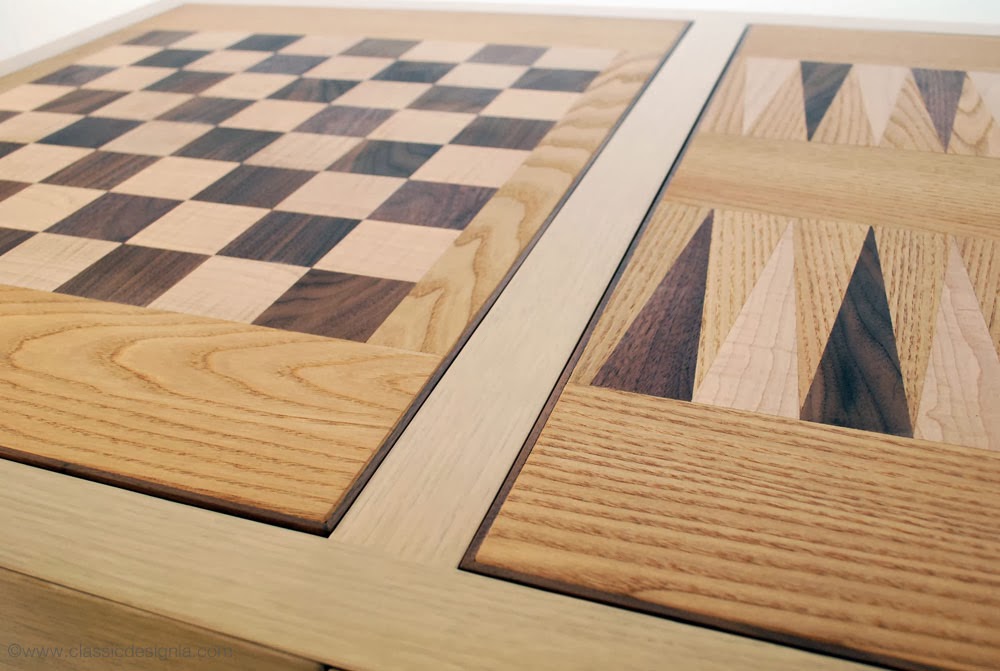 The game boards are made of maple, walnut and chestnut. It's a remarkable piece and we hope the client loves it.
Posted by Classic Design at 6:00 AM No comments: 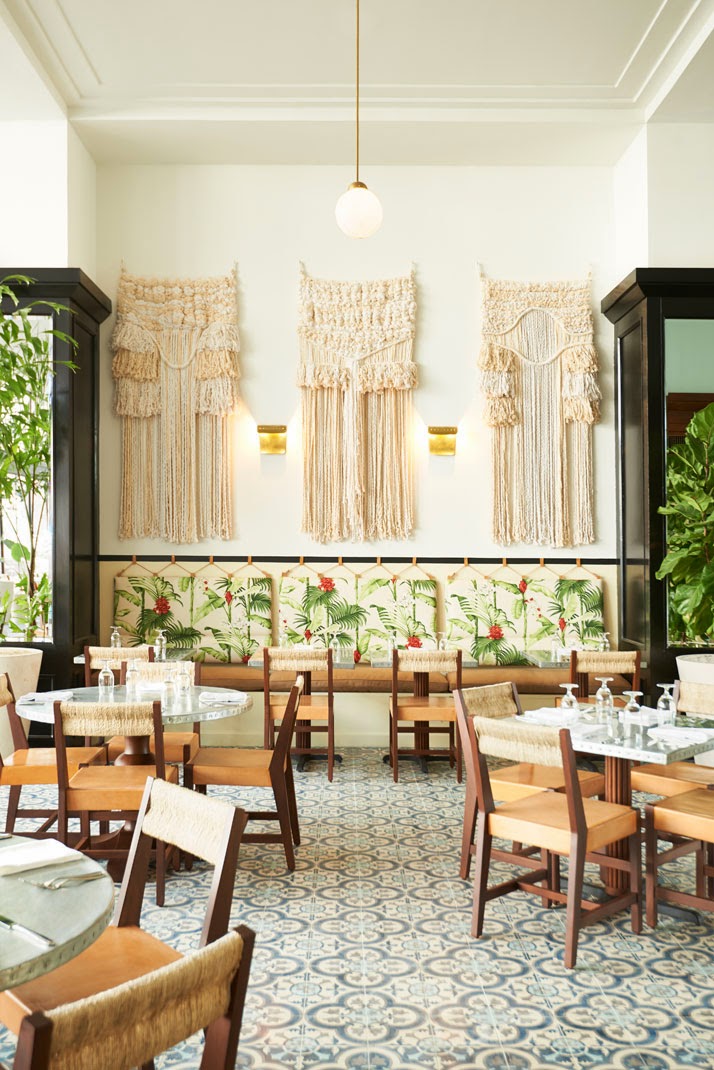 This is a project we worked on late last summer (seems so long ago now!) - Classic Design fabricated the back banquette cushions for recently renovated American Trade Hotel in Panama (part of the Ace Hotel chain). 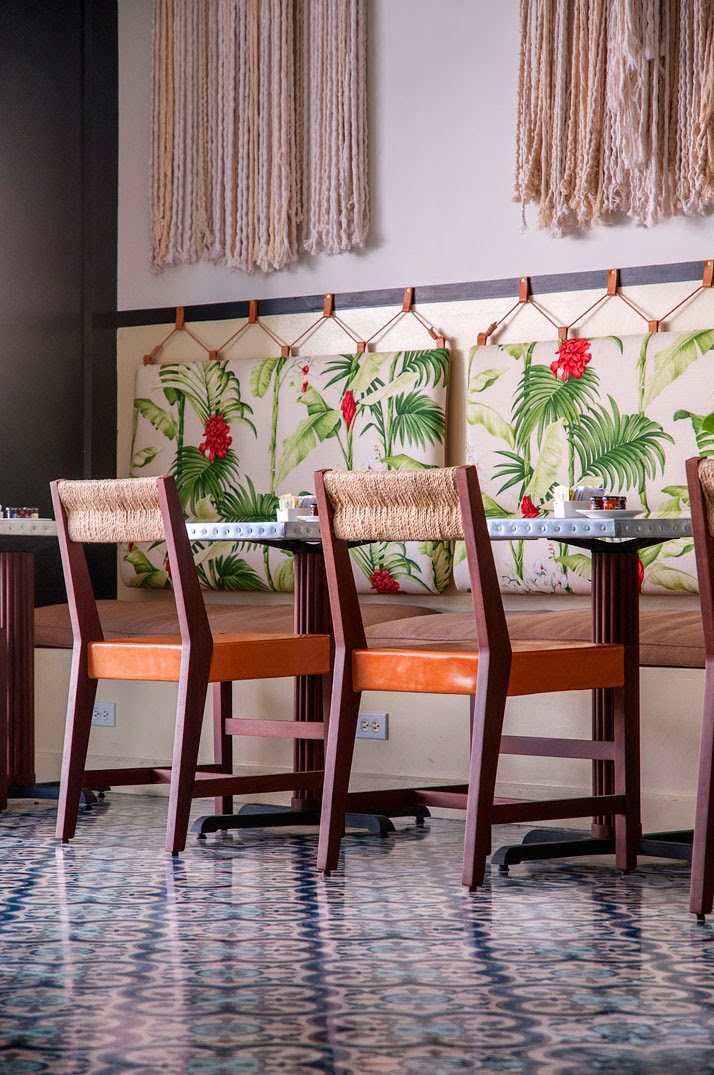 This was a little complicated in that, as you can see, the back cushions are hanging from a rail. All the cushions have to be hanging in the same place; we fabricated the leather lacing and leather tabs, making sure every cushion would align properly. It's difficult to see in the photos, but the cushions are not flat; the lower 8" of each cushion has a built in lumbar roll. Here's our little mock up below - the ends of each leather rope is finished in a 'noose' tie. 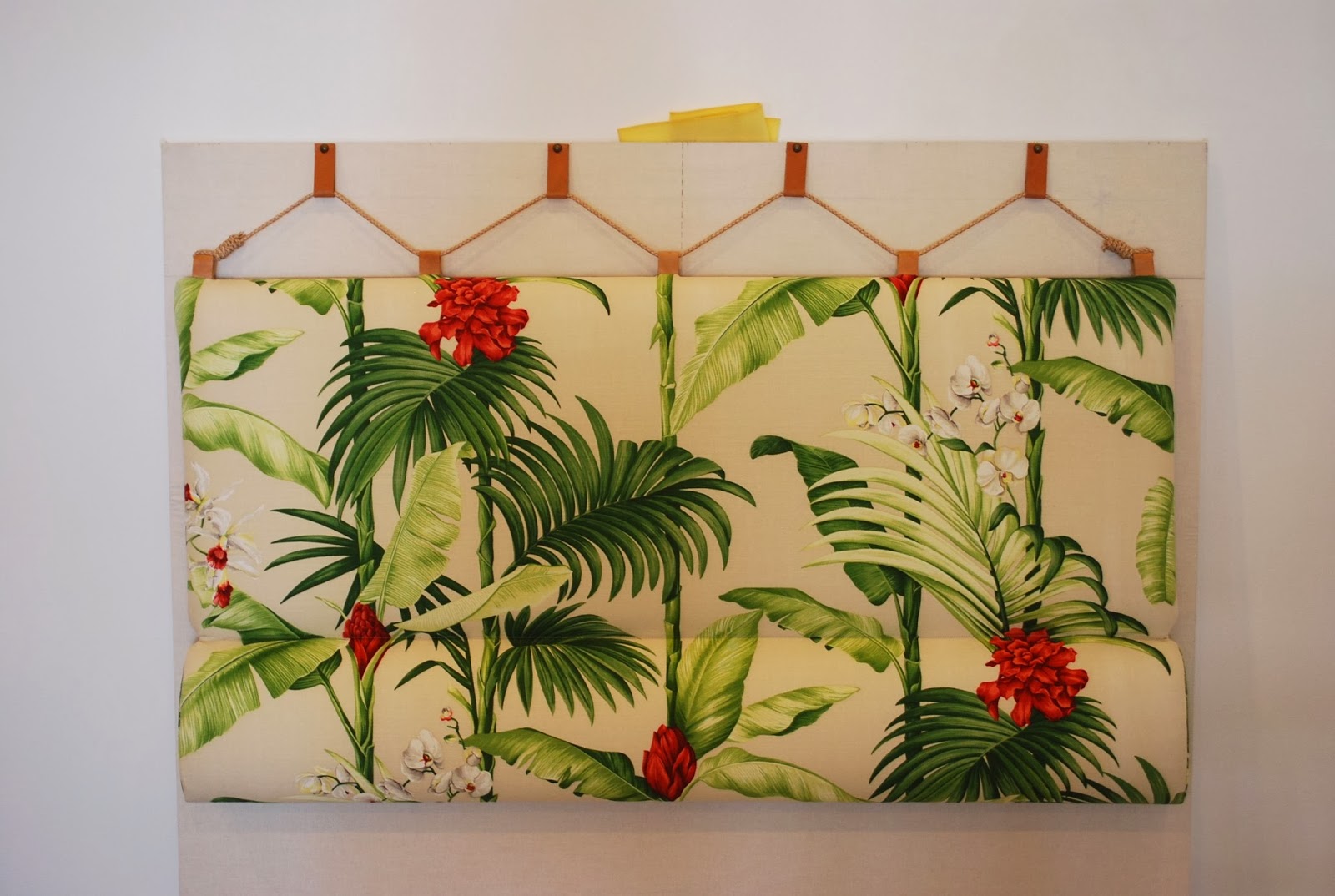 There are some beautiful photos of the completed hotel project, as well as the story behind the restoration here, here, and here.
Posted by Classic Design at 6:00 AM No comments: 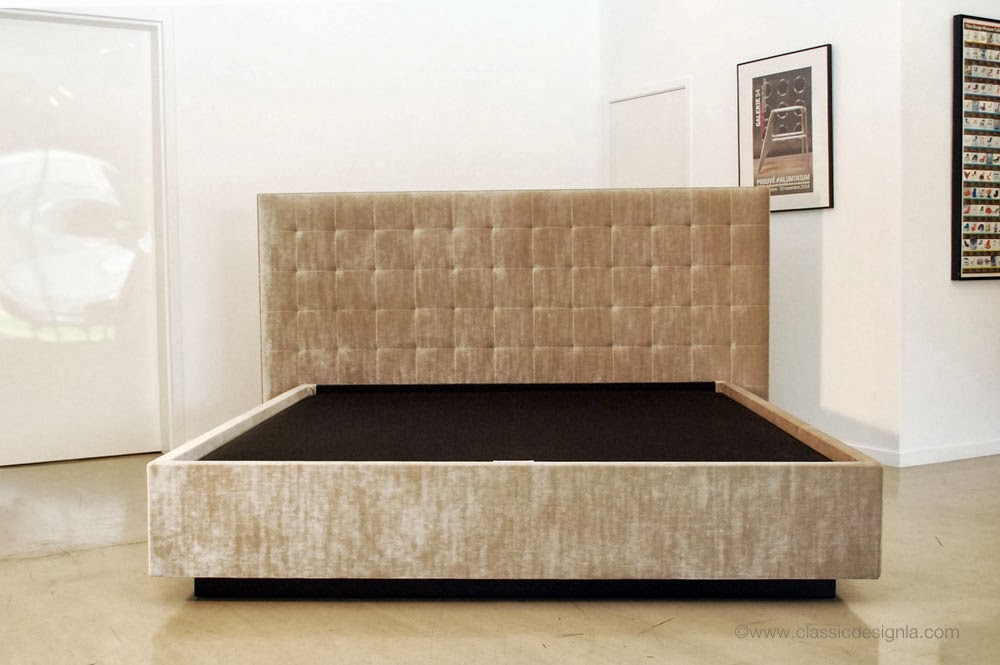 This California King custom bed is another piece that we finished in February. The headboard is lightly tufted and sits outside the matching upholstered box spring base. Both pieces are upholstered in a beautiful grey velvet by Rubelli. 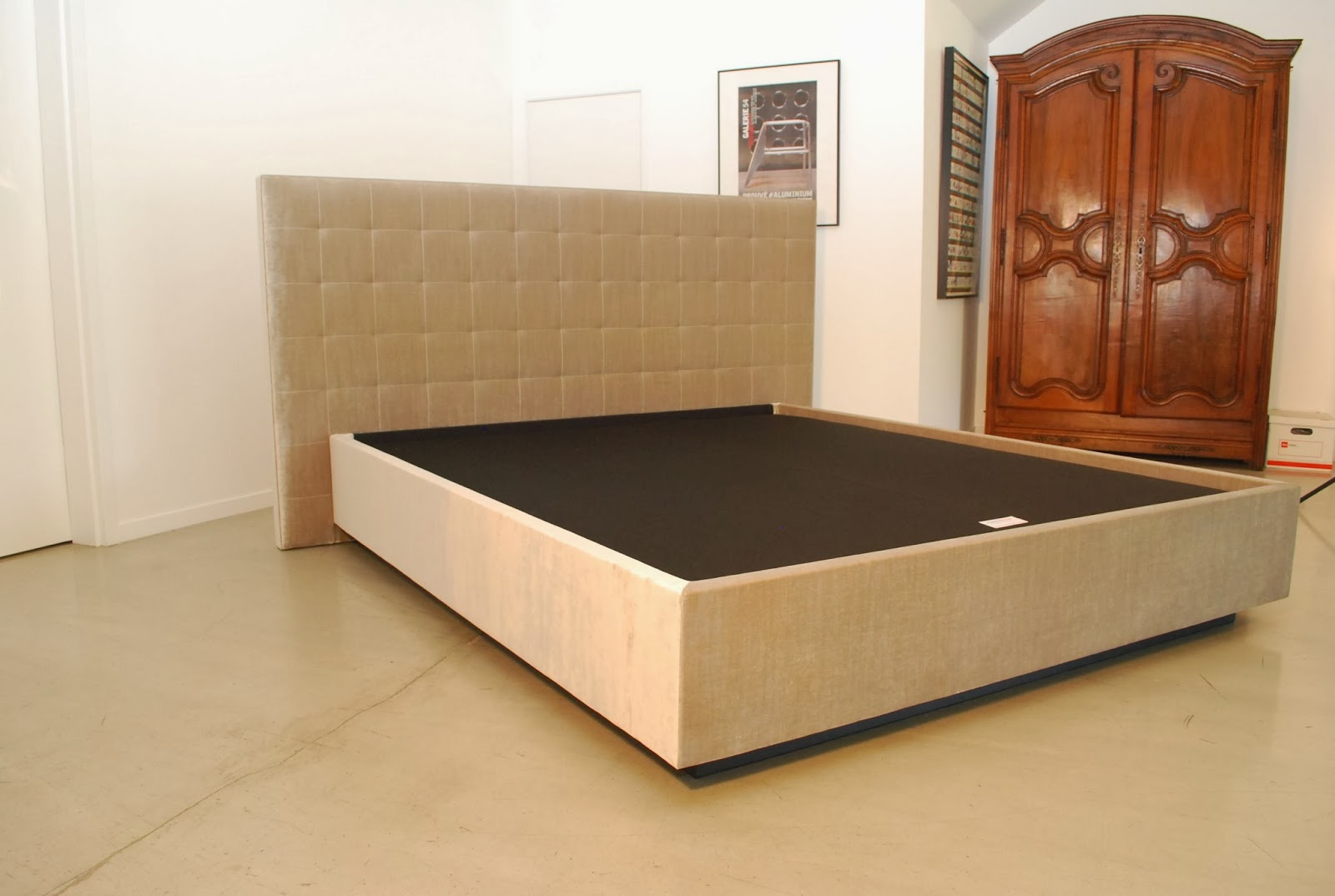 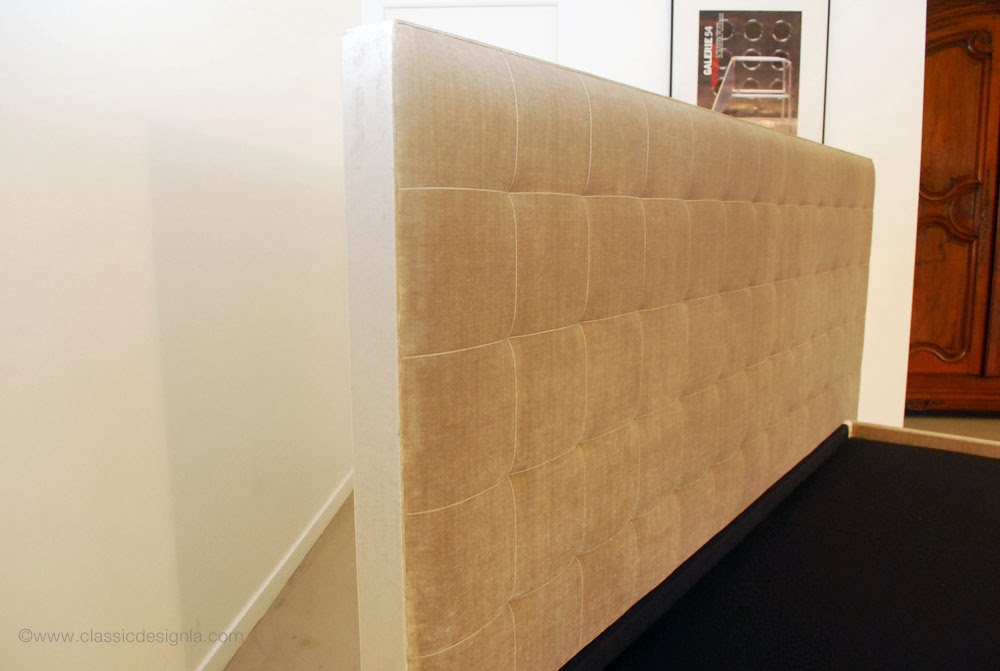 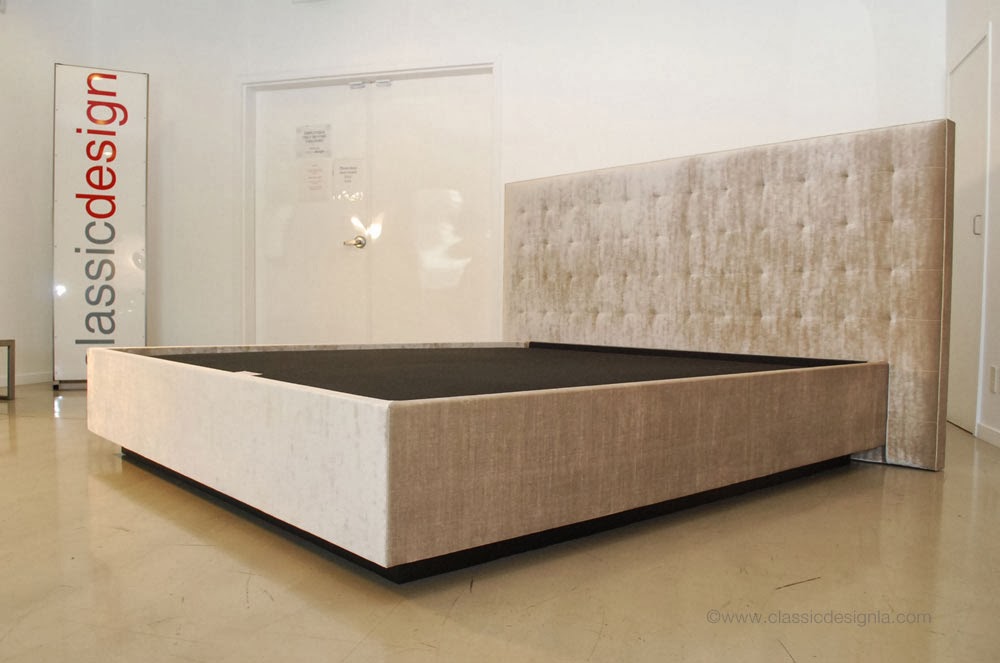 The recessed base is walnut with a dark espresso stain.
Posted by Classic Design at 8:00 AM No comments: 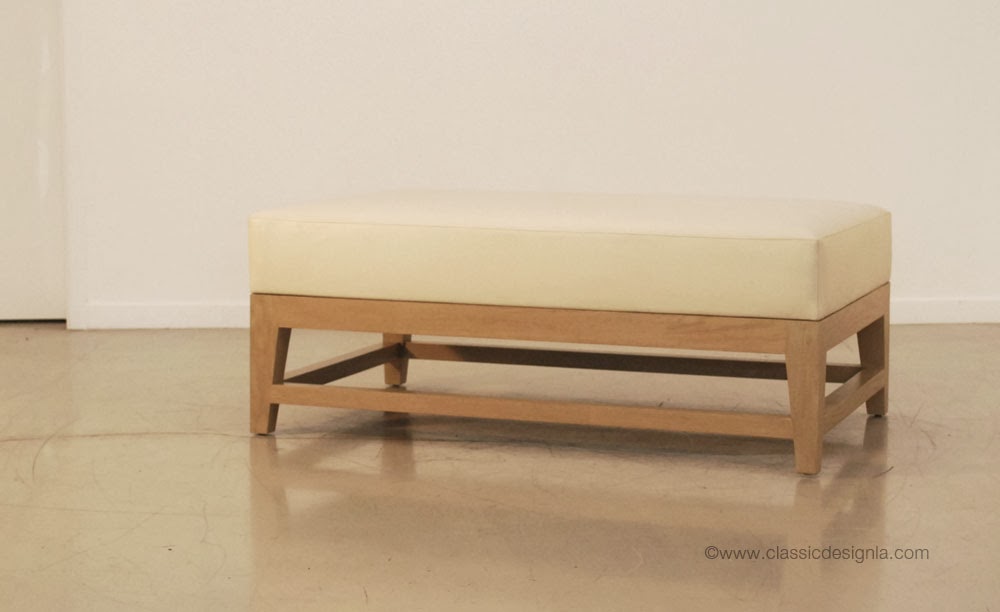 Another recently finished piece is this leather topped white oak ottoman. It's a style we have made before; our clients love the simplicity and clean lines. 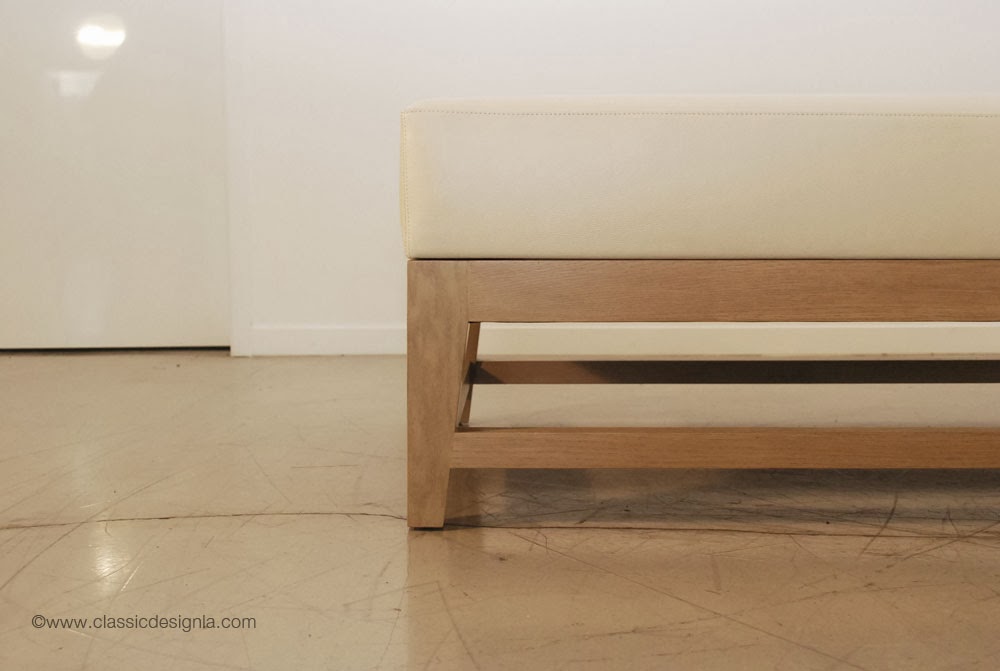 Posted by Classic Design at 8:51 AM No comments:

Unless otherwise noted, all content & images are copyright and owned by Classic Design. Please refrain from copying or using our material without consent.